Key Takeaway: Reforms grounded in research can move the nation forward under ESSA.

BOULDER, CO (July 28, 2016) – With chapters written by a who’s who of the educational research world—a collection of authors that Larry Cuban describes as “a cast of all-star scholars” and Gloria Ladson-Billings calls “some of the nation’s best minds”—the National Education Policy Center released its latest book: “Learning from the Federal Market-Based Reforms: Lessons for ESSA.” Editors William Mathis and Tina Trujillo brought these researchers together to create a critique of recent reforms followed by a series of proven, research-based reform strategies.

With states now finalizing their improvement plans for the new federal “Every Student Succeeds Act” (ESSA), the book provides a timely guide for policymakers and practitioners. 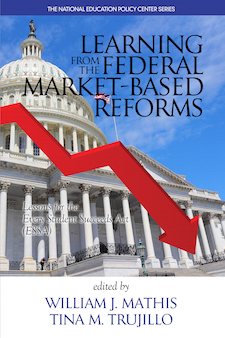 Pointing to the need to move beyond the discredited test-based, discipline-and-punish mentality, David Kirp says the volume makes a clear and convincing case for a genuine reform agenda. “It’s a must-read for anyone concerned about the quality of American education.”

Pedro Noguera adds, “This book points to what we must do differently if we are to succeed in providing all children an education that will prepare them for life in the 21st Century.”

Throughout the book, scholars such as David Berliner, Gary Orfield, Mike Rose, Janelle Scott, Richard Rothstein, and Angela Valenzuela remind us that reform requires us to address the root causes of inequities within schools and beyond the school walls, closing opportunity gaps wherever they arise. We must address deprivation, poverty, racism and the inadequate and unequal distribution of resources.

Among the federally promoted reforms examined in the book are school choice, testing, teacher evaluation and school reconstitution. Other chapters look at the research around class size, early education, adequate and equitable funding, community involvement, and detracking.

The book is available from Information Age Publishing here and from major booksellers.

EARLY ORDER SAVINGS – You can purchase the book on the IAP websiteat a substantially reduced price of $30 per paperback or $70 per hardcover plus s/h. The code to use at checkout is LFMBR30350.

The book will also be available as an eBook within the next 90 days from Google, Apple, and over 25 other online outlets.