I can't say I'm surprised, but it looks like Bernie Sanders' latest policy speech on education – where, among other things, he calls for a ban on for-profit charter schools and other charter school reforms -- has generated a lot of fair to poor journalism that purports to explain what charters are and how they perform.

Predictably, the worst of the bunch is from Jon Chait, who cheerleads for charters often without adhering to basic standards of transparency. Chait's latest piece is so overblown that even a casual reader with no background in charter schools will recognize it for the screed that it is, so I won't waste time rebutting it.

There are, however, plenty of other pieces about Sanders' proposals that take a much more measured tone... and yet still get some charter school basics wrong. I'm going to hold off on citing specific examples and instead hope (against hope) that maybe I can get through to some of the journalists who want to get the story of charters right.

Here are some things a journalist should understand before attempting to write about charter schools:

1) The CREDO studies are severely limited, and their reporting of effect sizes in "days of learning" is not warranted.

It seems that the CREDO studies of charter school effects continue to stand as the go-to source for journalists looking to find if charters "work." It should go without saying that relying on one methodology to make sweeping statements about the efficacy of a particular policy is highly problematic -- especially when the methods used in the CREDO studies have been so poorly documented.

The 2015 urban charter study seems to be the one cited most often in the press -- and yet journalists often fail to understand that it is not a national study. It is, instead, a study of multiple regions, picked by the CREDO team for... reasons? Here in New Jersey, for example, the CREDO study of the state found that gains were confined to Newark -- the only city from New Jersey included in the 2015 report. Why omit Jersey City and other districts? They don't say.

The CREDO studies essentially match charter students to a "virtual" public school student. That match, as Andrew Maul and Bruce Baker point out, is only as good as the data -- and the data isn't good. Students are classified as "poor" or "not-poor"; "student with disability" or "student without disability." When you have data this crude, you need to approach the results with great caution.

But the CREDO team does exactly the opposite: they translate the effects into a "days of learning" measure that is unvalidated. Time and again, I've seen journalists write that these studies show charter students demonstrate X number of days of extra learning. When you follow the citations in the reports, however, you find there is no basis for ever making that claim.

Instead, the aggregate effects sizes in the CREDO studies show a small gain: statistically significant largely because the sample sizes in these studies are large, but of little practical significance. I made this chart a few years ago: 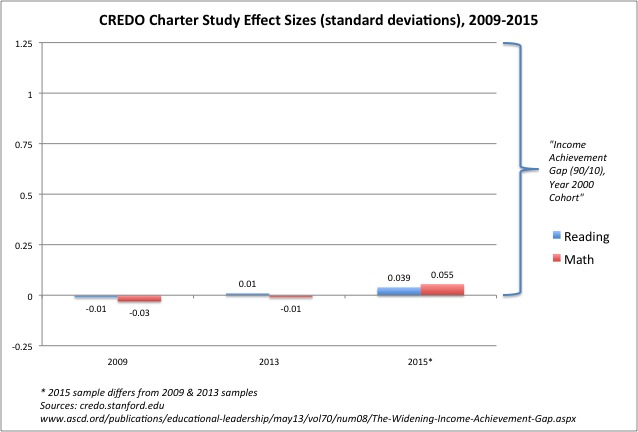 The CREDO effects are a tiny fraction of the effect of family income on student achievement (as Sean Reardon notes, that income gap is getting wider). So any notion that charters are "closing the opportunity gap" is just not held up by CREDO's evidence.

2) Charter schools are publicly funded, but that doesn't automatically make them "public" schools.

We keep having this argument, but getting charter school supporters to see the obvious differences between charters and public district schools has become an exercise in futility. Inevitably, they define "public" as whatever they think it should be: "This charter school is funded with public money, and it's regulated by the state, and it's open to all, so it must be public!"

On its face, that statement is way too facile. Charter schools are often not open to all: they pick their grade levels, cap their enrollments, and sometimes have admission requirements that are onerous. A charter school can close at any time; when they do, a public school district must provide seats for the charter's former students.

3) There is some evidence that charter school expansion affects public district school finances, although context matters a lot.

My own research shows that charter schools in New Jersey impose fiscal pressures on schools through enrollment declines. But context is critical: not all states see the same effects. A new paper by Paul Bruno, for example, shows markedly different effects in California.

I don't think we'll ever find a simple answer to the question: "Do charters drain money from traditional public schools?" My research suggests in some states charter expansion increases spending per pupil in public district schools. Whether that spending helps students or is simply an increase in inefficiency is an open question.

There is, however, reason to believe that many charter schools are inefficiently small. And in some cases it appears that charter schools do not make locational decisions that maximize system-wide efficiency. Again, this is a complex issue. The simple claim that "the money follows the child," and therefore fiscal consequences are irrelevant, ignores some important realities.

4) The "best" charter sectors get their gains through increased resources, peer effects, and a test prep curriculum -- and not through "charteriness."

Writers like Chait are certain that "good" charter schools get their effects because they are free from unions and bureaucracy, and because they've figured out some curricular and instructional magic tricks. But there is very little evidence to support the claim. What the data show instead is that higher-performing charter schools have a formula for "success" that is rather simple, but difficult to bring to scale.

I'll use Newark as an example because it is often lauded, along with Boston, as a city that is expanding charter schools the "right" way. I've spent a lot of time looking at the data, and the explanation for Newark's charter sector gains -- which, by the way, do not close the opportunity gap -- starts with this table, taken from my latest report on New Jersey's charter schools:

Newark's charter schools employ teachers who have far less experience than teachers in the public schools. Consequently, their costs for salaries are much lower. This allows them to pay their teachers more than comparably experienced teachers in the Newark Public Schools; for that extra pay, the charters offer a longer school day (and year).

In the absence of other learning opportunities for Newark's children, extra time in school is a good thing. The question, however, is whether this model can be sustained without the charters having the ability to free-ride on NPS's teacher wages; in other words, would the charters still be able to recruit their constantly churning staffs if the teacher candidates didn't know they could eventually transfer out into better paying jobs with shorter hours/years?

Next -- and we've gone over this repeatedly, but some remain in denial -- there is plenty of evidence students self-select to remain in charters with "no excuses" disciplinary policies: 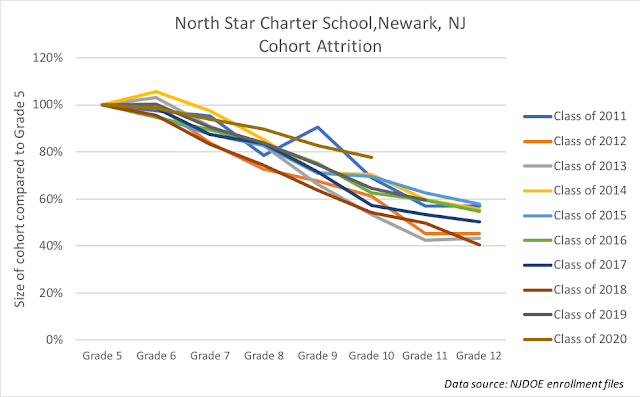 And no, the students don't just leave when they transfer to private or competitive admission high schools; if they did, all the attrition would be between grades 8 and 9.

Finally, as Daniel Koretz notes, "no excuses" charters freely admit they engage in a curriculum heavy on test prep. Bruce Baker and I have found evidence that Newark's charters do not deploy nearly as many resources into non-tested subjects as the public district schools. Focusing on the test will inevitably raise test scores, but there's a question as to whether those gains reflect "real" learning.

So the secret of "no excuses" charters is no secret: more time in school, peer effects, and a focus on test prep. Can this be scaled up? Even the recent study about scaling up Boston's charter sector shows only 17 percent of middle schoolers are enrolled in charters after expansion; that's not a lot, at least compared to places like Newark. What happens if charters get up to 40 percent? 50? 70? Will qualified teacher candidates still be easy to find? Somehow, I doubt it.

5) "Non-profit" charter schools can and do engage in behaviors that are not in the public interest.

Sanders' proposal calls for abolishing for-profit charter schools. Many charter advocates are getting behind this idea, as the outrageous behaviors of some of these operators is hard to justify. But what's missing from the conversation is the fact that nonprofit charters are hardly squeaky clean in their operations.

In a stellar bit of investigative journalism, The North Jersey Record lays out the issue: charters can organize as nonprofit "shells," and then contract out large parts of their operations to for-profit charter management organizations (CMOs). Often these charters make deals for their facilities that are not in the taxpayers' best interests; essentially, the public pays for buildings -- which, in some cases, they used to own! -- to move them into private hands.

New Jersey is considered to be one of the better states when it comes to charter regulation. And yet, because of poor planning on the part of the legislators who wrote the original charter school law, charters have been forced into facilities deals that are highly questionable. Unfortunately, it appears at least some charter operators saw opportunity in this situation, and have enriched themselves at taxpayers' expense.

It's also worth noting that some executives in the largest nonprofit charters have done very well for themselves: 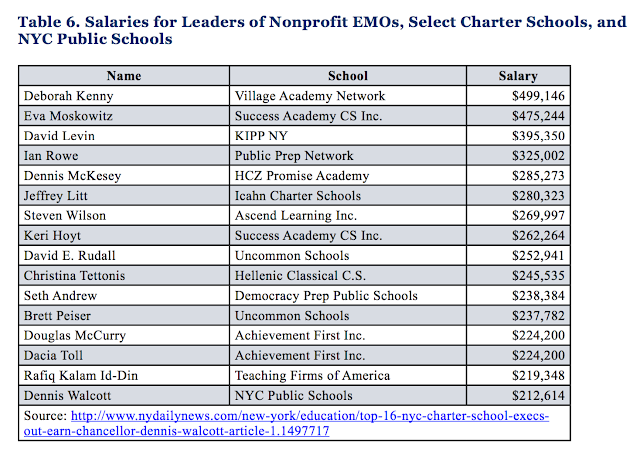 Do public district school officials engage in self-serving behaviors? Sure -- but that makes the point. Operating a nonprofit charter school does not automatically mean the government shouldn't be closely monitoring your actions.

Journalists, I know this stuff is complicated, and you're on a deadline, and your readers aren't going to wade through all this (although... are you really sure about that?). I'm just asking you to stop for a couple of minutes before you jump into charter school policy and consider a few things. You can do better than Jon Chait -- much better.

ADDING: Sweet Christmas, the comments on Chait's piece are a dumpster fire on top of a superfund site. There appear to be people whose only function in life is to defend Chait from not revealing his conflicts of interest.

And I thought nj.com's comments were the worst. Is it always this bad at New York?