One of the arguments pro-charter folks typically trot out to oppose the "charter schools cost students in local public schools money" argument is that while state funding drops, per pupil funding goes up because no local funding follows the charter school student to the charter school.

The way charters are funded Ohio is if a child decides to leave Columbus City Schools, the state removes at least $6,000 in state aid originally meant for Columbus to educate the student and sends it to the privately run charter school. The problem is that the state would have only given Columbus about half that amount if the students had stayed in Columbus. So it doesn't take long for that state funding loss to add up. 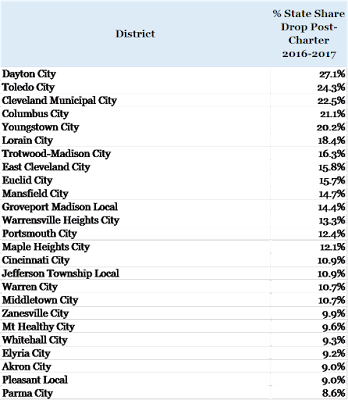 Columbus then has to fill in the state funding gap with money raised from local taxpayers. And while that will mean an overall per pupil increase for some districts, the reliance on locally raised property taxes jumps significantly, which is the exact opposite result the Ohio Supreme Court ordered the Ohio General Assembly to fix four different times.

Last school year, for example, several school districts saw their state-funded share of the education funding pie drop by as much as 27 percent. Here is a list of the top 25 percentage state funding share drops.

As you can see, the major urban school districts see the largest percentage of state aid cut from charter school deductions. So this means the state's unconstitutional funding system that relied too much on property taxes is exacerbated the worst in our urban core.

But there is also a phenomenon that pro-charter advocates rarely discuss: What about school districts that don't raise enough local revenue to make up for their huge state funding losses to charter schools? 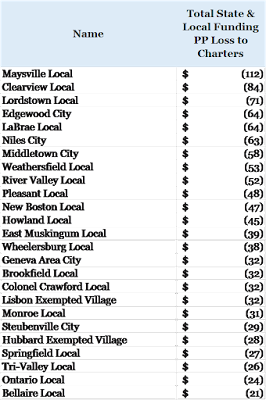 That's right. In 100 Ohio school districts, charter schools take so much of their state revenue that these districts can't raise enough property taxes to make up the difference.

Here are the top 25 overall, per pupil funding losses to charter schools. Remember that every kid in each of these districts lose overall funding because charter schools take so much local revenue the local districts can't raise enough property taxes to fill in the gap.

Now these per pupil funding losses are not enormous. But the fact is that they happen, and they do so fairly frequently. And even when they don't, the charter school funding system makes our state's unconstitutional, property tax overreliance worse, not better.

It would be one thing if charter schools were providing better educational options for our kids. But they, on the whole, are definitely not doing that.

So here's the result of more than $11 billion spent over 20 years on Ohio charter schools: schools that perform worse than the schools they were meant to compete with all while making Ohio's school funding system more unconstitutional.

Think we need some reform?