Today is all about solutions.

Let me say that I'm not developing the quintessential list of fixes. I'm putting together what I think will help the charter sector improve the quickest and best way. We're going on 20 years of charters in Ohio. We've had little if any true reform of these things over those now three decades. We can't afford any further delays.

There needs to be a three-pronged approach to fixing Ohio's ridiculed charter school sector.

In the 2013 CREDO study on national charter school performance, the authors determined that "the use of the option to close bad schools represents the strongest available tool to improve overall sector quality ... the impact on quality that accompanies closure is more dramatic and enduring than efforts to improve the current stock of schools."

What does that mean? It means closing failing schools quickly will quickly improve the overall performance of the state's charter school sector. However, in Ohio, a charter can stay open for 6-7 years (depending on grade) before it's closed. And the failure is a very low bar -- getting a report card F grade in certain categories. So a charter can stay open if they get Ds every couple years.

There's a pretty straight forward solution to this issue. The state gives a two-year "honeymoon" period where charters don't receive report card grades for its first two years of existence. In addition, once the school is determined to be failing, it gets to stay open for the year before it closes. Eliminate some or all of these three years and schools would have 3-4 years to prove their worth. That's plenty of time. Given our state's limited resources, we just can't be pumping millions into these schools. As the CREDO authors observed: "we do not see dramatic improvement among existing charter schools over time."

So something closer to 4-ish years should do the trick. And Ohio has a couple loopholes in place already that would simply need closing.

I would also advocate for a tougher closure standard, in accordance with what CREDO found that

"in many places, the standards of performance are set too low, as evidenced by the large number of underperforming charter schools that persist. The point here is that, as with students, setting and holding high expectations is an important feature of school policies and practices. More focus is required of authorizers and charter school governing boards to set high performance and accountability standards and hold charter schools to them."

This is the (literally) $1 billion question. How to fund these schools that don't get local revenue so they can succeed? Well, some would argue they should get local revenue. However, there are a host of issues with that premise. For example, would their local capacity be deducted from their state aid amounts, as local public school districts' are currently? And what about the charters that take kids from more than one district? Whose local revenue would cover that school's cost?

However, judging from state expenditure data, Ohio's charter schools may have enough to spend about the same in the classroom as districts. Except they don't. Because they spend a ton more per pupil on non-instructional administrative costs. If Ohio charter schools spent the same per pupil amount on administration that districts did, they would have enough to spend the same on instruction as districts, even without local revenue. 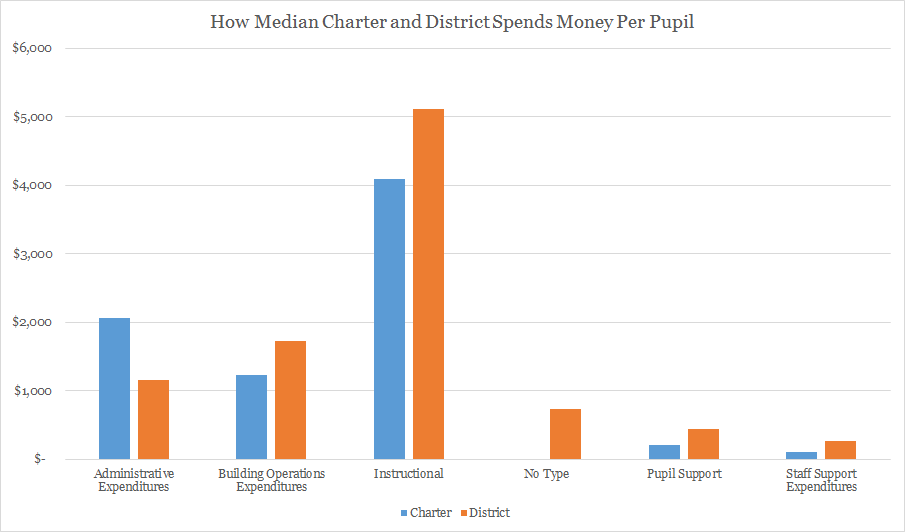 The issue then is whether that instructional spend is adequate for kids, and there's real question about that. But be that as it may, Ohio's charters are receiving enough money now that they could be spending the same on instruction as school districts. They just don't.

The key to funding both charters and local public schools is this: an accurate formula that reflects the real cost of providing high-quality educational opportunities to children at the school they are attending. In the charter sector, Ohio's charters get paid based on what the child's home district would have been for that same child, trouble is that that expenses are far less in charters. FOr example, they pay their teachers about 60% less and don't pay for busing. Yet they are paid by the state as if they paid their teachers 40% more and busing.

Ensuring an accurate measure of cost in both sectors will mean that the right amount of funding will flow to the child based on where the child goes to school, not where they live. There should also be substantial bonuses for charters that are doing a good job. So the overall structure works like this: fund low performing charters at the level where you can't make huge profits off failure, while funding high-performers at a level that would ensure their continued success.

Charter schools have a conundrum. They are funded almost exclusively by public funding. Yet they are run by private entities, either non-profit or for-profit companies. However, this structure leads to concerns that they really aren't public schools at all, simply publicly funded, privately run schools.

If charters want to be considered public schools, then they need to act like it. Have open meetings that everyone can attend. Publish all their financials. Be as open for public inspection as any public school. If it walks like a duck, right? Unfortunately, right now, charters simply don't walk or quack like public school ducks. And they should.

These three principles should drive any reform effort. And the current measures in the Ohio General Assembly meet many of their goals. Yet, we still are largely dodging the closing failures quicker and funding issues. And to achieve true reform for our kids we simply must deal with these issues.

In future posts, I will give my thoughts on each of the measures currently being considered -- the most promising of which is Senate Bill 148.

But for now, let it be known that I believe charters can work in Ohio. They have worked. But spending almost $1 billion is simply an unwarranted extravagence, according to the data. We could have a far more effective school choice program for this state at a significantly lower price tag, freeing up resources for interventions we know work on a large scale.

This is our charge. Make charters work. Those that don't, shut them down. Those that do, let thrive. And let's stop having this sector that educates barely 10% of our students eat up 90% of our education policy discussion. It's time to move on.

The world, as our children will shortly learn, is not this patient.