One of the things most charter school reformers agree about is that whatever Ohio's charter school reform looks like, its few high-performing charters should be allowed to thrive. However, there's been some debate about how a high-performing charter should be designated. While it certainly should be tied to the report card somehow, the question is should the grade be A, B, or C? And in which of the 9 report card grade categories should they be considered?

Well, the Ohio House Education Committee took the first stab at it with yesterday's Omnibus Amendment to House Bill 2. I've commented at length about the changes in an earlier post. But I wanted to spend some time examining this question about what is a high-performing charter school.

The Amendment definition is a charter that receives a C or higher grade in both Performance Index (proficiency) and Value Added (student growth). A school that receives those grades would qualify under the amendment to accept preschool kids.

Whenever I've done it, I've considered a charter that gets an A or B on growth measures and/or scores above the state average PI score to be high performing. That generated 111 of 348 charters. The Amendment definition captures 57, or about half as many, which means the C in both categories is a tougher standard than mine.

What's stunning is this: If we considered only As and Bs in both categories, that number would drop to 11 schools. Out of 348. Wow. So, while I would prefer the A or B option, it wouldn't capture enough charters to mean much.

But what you can see is that while the C designation is indeed exclusive for charters, for local public buildings and districts, that standard is rather pedestrian, with 70% of districts qualifying as high-performing under this standard. Remember that all Ohio school districts lose money and children to charters and about 1/2 of all charter kids don't come from the big 8 urban districts. 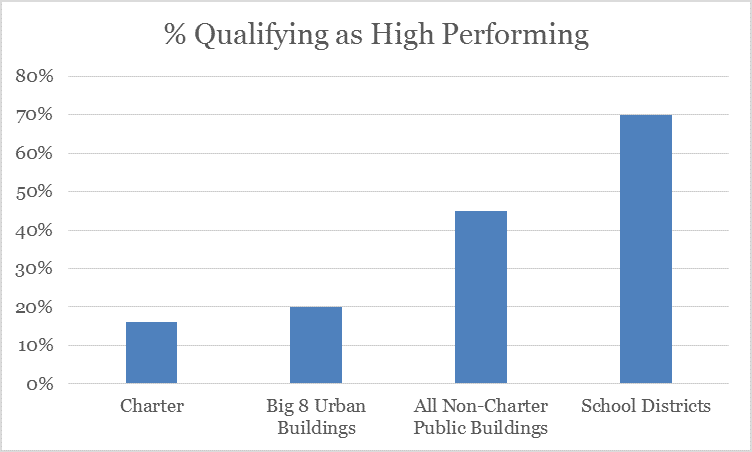 And there are also some incongruities. For example, Menlo Park -- a gifted charter in the Cleveland area -- has among the highest Performance Index scores in the state, but because their growth is a D, they won't be considered high performing by the state.

One more interesting point is this: Looking at which charter school operators have the greatest percentage of the schools qualify as high performing.

According to state and national data available on http://www.KnowYourCharter.com, the Breakthrough Schools in Cleveland had the highest percentage of its schools qualifying. Meanwhile, White Hat Management -- run by mega-political donor David Brennan -- has the lowest percentage (of those who had any), with the notorious Imagine Schools chain a close second worst. I don't count Summit Academy (none of whose 26 schools would qualify) because they deal exclusively with a special education population and their special ed growth measures are pretty good overall -- only 3 of their 26 schools earned below a C on the last report card. 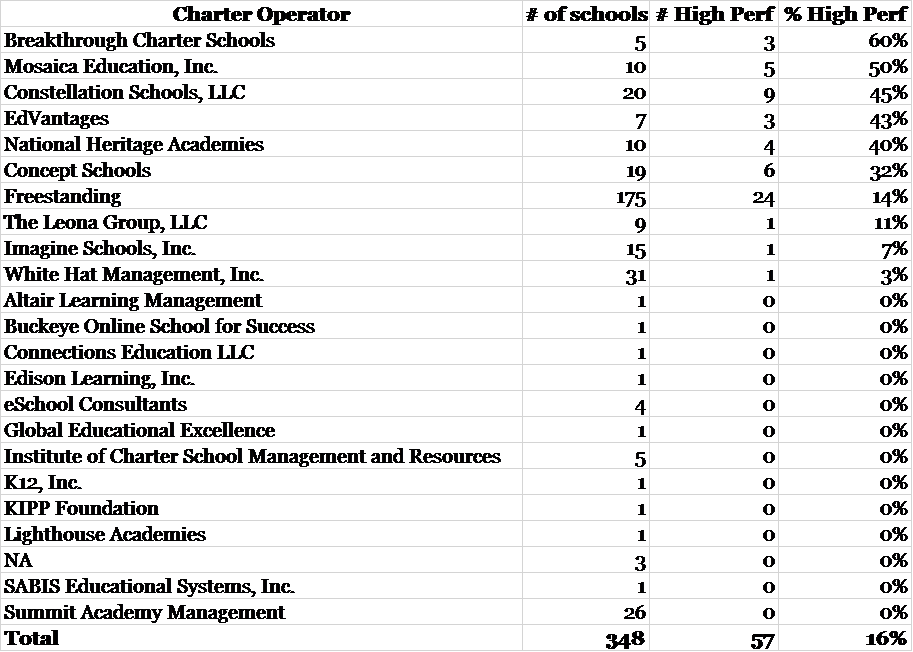 Another point of interest -- 3 of the 6 operators with the highest percentage of high performing schools are for-profit operations. Those three are Mosaica, Constellation and National Heritage Academies (J.C. Huizenga's controversial operation from Michigan).

Freestanding operations are schools that don't have an operator running them.

Suffice to say that it looks like the C standard will capture a decent amount of charter schools and leave out the worst-performing schools. And that's a good start.