In the new state report cards there's something called "AMO". AMO stands for Annual Measurable Objective. I know. What the hell does that mean?

In short, really nothing. What AMO does is measure the proficiency score performance gaps between races and socioeconomic groups. So AMO will tell you how much better or worse a group of students perform when compared with students as a whole.

Why do I spend all this time explaining this obscure metric? Because it's one of the more important measurements the Ohio Department of Education puts together. It holds schools and districts accountable for ensuring all kids succeed, not just the ones who have all the advantages. In many ways, AMO is a testament to the Civil Rights movement and its call for equal opportunity.

Now there are serious issues with AMO, not the least of which is it measures performance almost solely based on state tests (it also includes attendance and graduation). It does not measure educational opportunities afforded different groups of students that provide just as stiff a barrier to equity as tests, such as whether there are gaps in access to advanced courses, arts programs, or other opportunities advantaged students have.

Yet despite AMO's limited scope, I still like the idea of holding even the wealthiest districts and schools in the state to account for how their least advantaged students fare. It means that wealthy areas can't just ignore these kids without consequence. For example, if Upper Arlington's C in AMO forces them to divert more resources to their few disadvantaged kids, that's a good thing.

Again though, I would prefer more measures of opportunity be included beyond just limited test scores.

So achievement gaps are growing wider and quicker in Ohio charter schools than Ohio school districts. 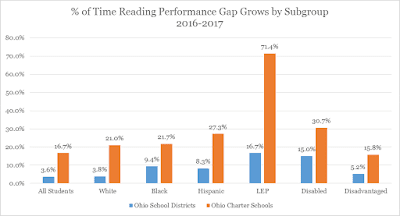 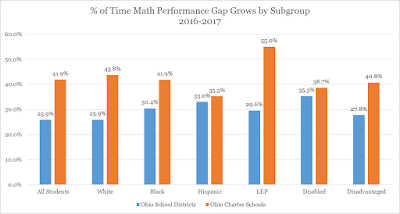 While it is true that more times than not Ohio's charter schools shrank rather than grew the gaps, Ohio school districts were simply far better at shrinking their prior year's gaps than their free market counterparts.

What does this mean? It means that far from granting greater equity for disadvantaged students, as many choice advocates claim, with some even suggesting that access to charter schools is a civil right, Ohio charter schools actually exacerbate achievement gap issues, which is the exact opposite of the civil rights movement's goal.

I find it difficult to argue it's a civil right for disadvantaged kids to access a system that is more likely to make their achievement disparity with their advantaged colleagues worse.

As I've said many times before -- after 20 years and $11 billion, is this the best our state's charter schools can offer?