For some time now, I've been posting this graph on the blog: 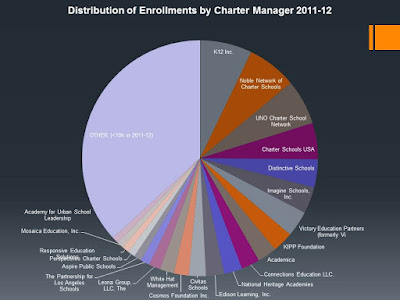 This graph is incorrect, and it's my fault. Let me explain:

Last year, I made a dataset that merged the work of education researchers Gary Miron and Charisse Gulosino with a school database from the US Department of Education. The dataset was for an academic paper on for-profit charter management organizations (CMOs) that is still undergoing peer review. I used the Miron-Gulosino directory of CMOs as a base, made some changes on my own, and then combined this directory with the federal data to analyze patterns in school spending.

My co-author, Bruce Baker, made the graph above with my dataset. Unfortunately, while most of the state-level datasets used for this pie chart were correct, one -- Illinois -- was not. At the risk of going way into the weeds, what happened was that several CMOs in the Chicago area were over-counted, so that the total number of students enrolled by the CMO were multiplied by the number of different campuses in the Miron-Gulosino directory.

This is entirely my mistake: Bruce and Gary and Charisse had nothing to do with it. I apologize to them for misrepresenting their work, and I apologize to all of you for missing the error.

Here is a corrected version of this graph (click to enlarge).* 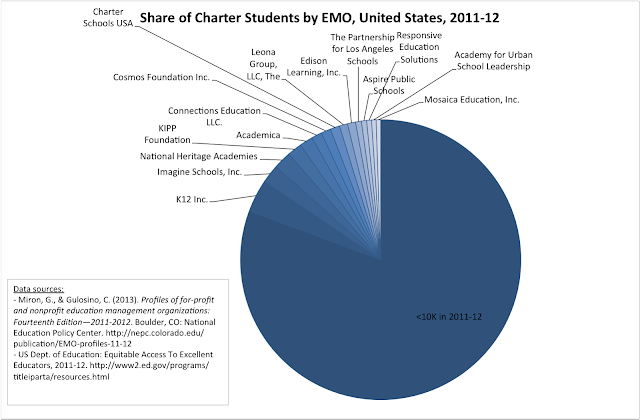 As you'll notice, the shares of students enrolled in Chicago-area charter schools -- Noble, UNO, Distinctive, etc. -- are way lower. Nobel's own annual report for 2011-12 put their enrollment at "more than 6,300," which means they and others move into the "less than 10K" category.

Which actually reinforces a point Bruce made in his post:

At least a handful of studies on high profile charter operators have yielded substantive, positive results, at least with respect to growth on narrowly measured student achievement outcomes, and in some cases on college acceptance/matriculation. Of course, even these studies, like the Mathematica/KIPP studies, or Fryer studies tend to totally ignore key features of the models that may be contributing to those outcomes – like money, smaller classes, more time and teacher pay to support that time.

But here’s the bigger picture – In all of this time that we’ve been allowing and inducing charter school growth, while studying KIPPs and others to validate positive effects – we’ve paid far too little attention to the actual distribution of providers out there. Most charter schools aren’t KIPP (whether we like KIPP or their educational model/practices). And most charter schools across the country aren’t like NYC’s (or Boston’s) other major charter operators.

There has been some increased scrutiny of K12's virtual charter schools in the last few of years (and the news has not been good). National Heritage has received some press due to its role in Detroit's charter school expansion and its schools in New York. The Miami Herald did some stellar reporting on Academica a few years ago, but there hasn't been much following up. These few stories, however, are the exception; overall, there has not been much in-depth reporting on the results many charter operators are getting.

In the academic literature, KIPP has been the focus of quite a few econometric-based studies. I have my issues with some of the methodologies and reporting of results (I'll have more to say about this in the coming year), but at least the network has been assessed by serious researchers. At least we have some sense of the scope of the impact KIPP has on its students.

Further, and to their credit, the CREDO folks at Stanford have done some work on assessing the impact of CMOs on student outcomes. Again, I've got some serious issues with their methodologies -- but at least they have looked (a bit) into whether CMOs impact student learning differently.

Unfortunately, it's not nearly enough. We know next to nothing about many of the charters that enroll less than 10,000 students -- and that's 80 percent of the sector. We know a bit more about some of the major CMOs, but it's still not much.

By my reckoning, KIPP had a 1.7 percent share of the charter sector in 2011-12; Academica had a 1.5 percent share. Keep this in mind as you head over to the National Bureau of Economic Research, where many of the "lottery studies" on KIPP have been published as working papers. Do a search on KIPP; then do a search on Academica. Guess who has been getting all of the economists' attention?

I don't blame NBER researchers for not studying the other CMOs as much as they've studied KIPP; maybe they can't get the data or the cooperation they need. But we need to stop for a moment before we allow charter proliferation -- with all of its pernicious effects on district public schools -- to continue so we can assess what's really going on. We just don't know enough about the vast majority of charter operators to justify the massive expansions taking place in the sector.

And that includes the Gulen-linked charter schools -- I'll get to that next. Until then, let me again apologize for my error. 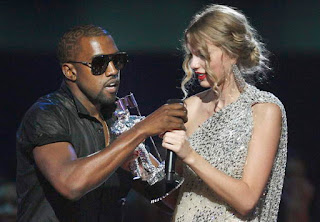 Also: the numbers I report here are somewhat different from those in Miron-Gulosino for a couple of reasons. First, I added and/or subtracted schools based on whether I could link them to federal data or not. Next, there were a substantial number of schools in Miron-Gulosino that were duplicates, listed as being managed by two EMOs. I had to choose one or the other (not doing that is what led to the error in Chicago schools). I made the best determination I could; on my last build (on which the above graph is based), I switched a few of the "second" EMOs to the "first" position based on some further research.